Sorry to disappear on you for a week but I had good reason!  Tim and I were celebrating our anniversary in Costa Rica.  It was everything that I dreamed it would be!  Although I must say that my hair and Costa Rica did not get along, as evident in the picture below. 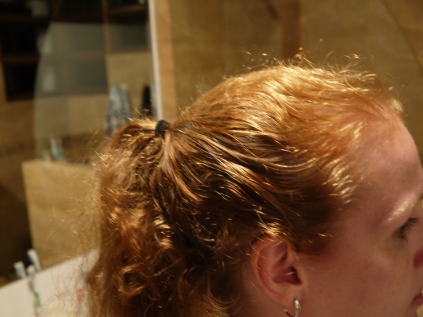 This was by far the most luxurious vacation that we have ever taken.  I mean look at this view of the Pacific Ocean from our villa…..

And breakfast delivered to our room every morning (excuse the fact that we dug in before I snapped a picture)….

We booked our trip through Luxury Link and got an amazing deal!  It’s kind of a cross between Ebay and Groupon for luxurious vacations.  It was our first time using it and I’m super impressed.  If you’re planning a trip, go check them out.  If you use my link, you get $50 off of your first booking.

I will have lots more on our trip this week!

Tim and I are celebrating 10 years of wedded bliss this week.  I purchased The Newlyweds’ Predictionary that we each filled out, along with a few friends.  Our predictions for our lives and marriage were pretty spot on.  We both predicted that we would have two kids and we got their birth years pretty close.  Tim even wrote down Janie (he spelled it Janey) for our daughter.  Pretty funny because I though I picked her name???  It was evident how much relationships with family members and friends have changed through the years (most for the better).

Then we got the questionnaires that our friends and family filled out.  And this is where I disappoint…….. 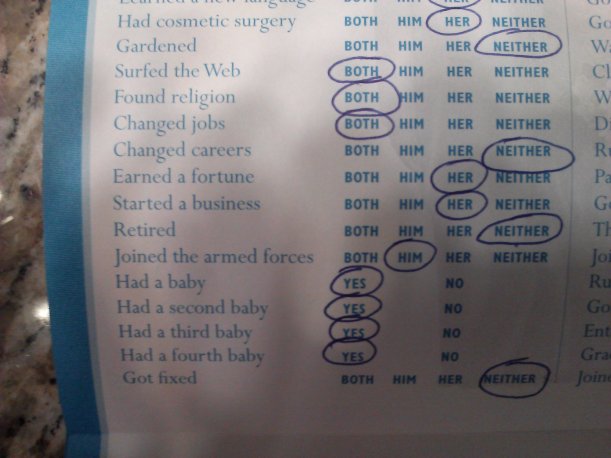 Six of the eight questionnaires said that I or both would have earned a fortune….not so much!  Of course these were filled out in 2003 so maybe I can blame the economy.  And this one with four kids, wow!  Also, most people said that I would be driving a minivan.  I can say that I do not own a minivan, although I am a little jealous of a button that open and closes the door.  These were really fun to read.  I have a few left, maybe we will fill them out to open in another 10 years!

We had Nolan’s 4th birthday party this weekend.  We went with the pirate theme.  This was his first party with classmates so that was exciting, though a number of them were out of town (darn summer birthday).

The party was at 2pm so we served snacks.

I got the pirate costumes after Halloween last year for around $3 a piece.  I planned on them wearing them for this coming Halloween but Nolan’s was a little snug already.  I don’t know if it will make it to October.  Glad he got to wear it for the party!

We played explode the cannon ball.  The kids tried to pop each other’s balloons.  The last one standing got to pick a prize from our treasure chest.

I tried a little experiment, I put fake coins, lots of Mardi Gras beads and a couple of $1 bills in the chest.  I was thinking that the kids would go for the colorful stuff but both winners chose the $1 bill.  I guess kids do see green! 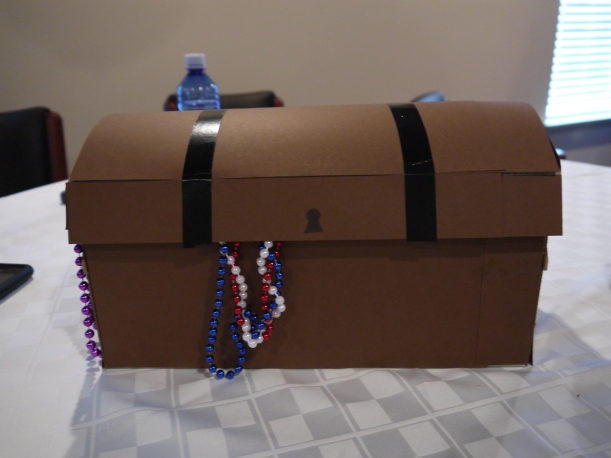 Pin your pirate ship on the map. 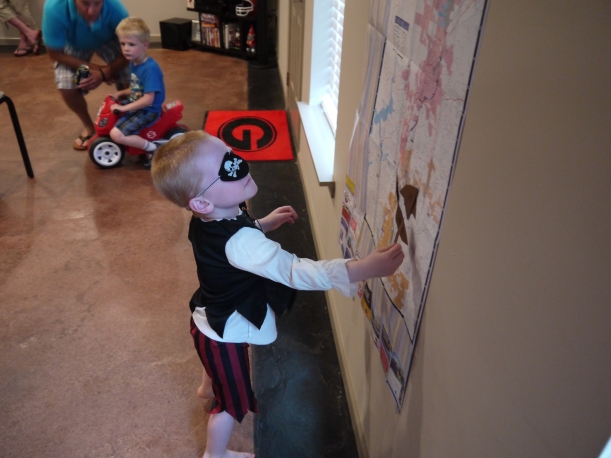 The birthday gang.  I told them to say ARRRRRR, hence Nolan’s facial expression.

The pirate ship cake that was made by my best friend’s mom, she’s amazing! 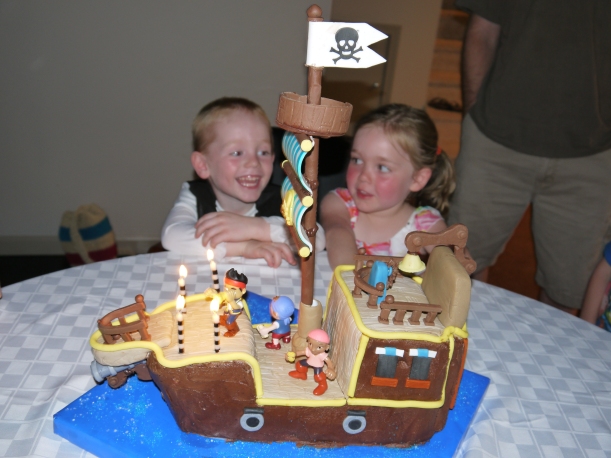 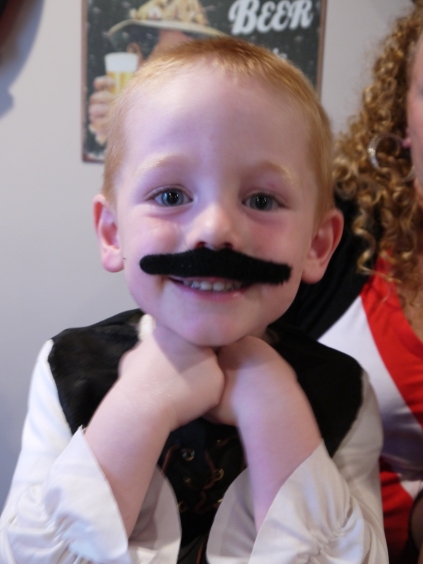 The birthday boy had a great time and fell asleep as soon as his head hit the pillow, always a sign of a great party!

I cannot believe that my baby is turning four!  Four is just so old, years away from baby and no longer a toddler. 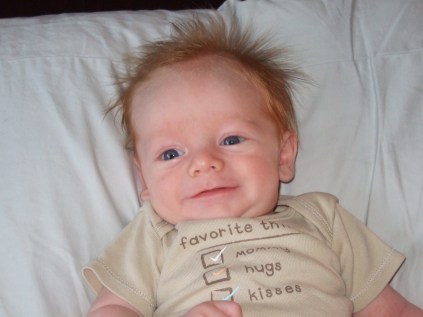 Now you see why we keep his hair short…..it’s crazy!

Even though PreK doesn’t start until August, he insisted on wearing PreK clothes to school today because that’s what 4 year olds wear. 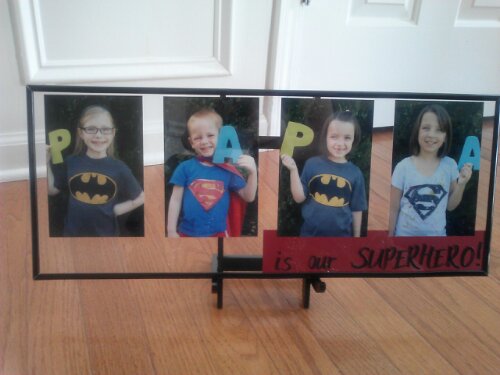 Happy Father’s Day to my dad, otherwise known as papa.

I tried CrossFit this weekend…….ouch!  It was a great workout but I have been in pain since.  Luckily, I can straighten my arms today.
We went out with some friends on Saturday night after the kids went to bed.  It’s pretty cool to have friends with kids that can babysit!

Nolan caught his first fish this weekend!  He gave Tim a heart attack when he almost fell off the dock.  Luckily, the rope caught him!

He also got his first bee sting.  He picked up a piece of wood that had a carpenter bee in it.  He seemed to recover very quickly.  He said, “a treat will make me feel better!”

Janie is loving Vacation Bible School this week.  She put on a show to all of her songs for us last night! 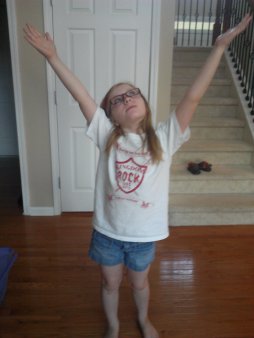 We are getting ready for Nolan’s pirate (I just noticed that it said private, ha) birthday party this weekend.  Here’s a sneak peek at the food labels that I made.  He is super excited!

If you could take a moment to vote for Nolan’s picture, that would be great!  It’s a Father’s Day contest through Cycle Gear.  I would love for Tim to win some gear for his bike!

Happy Tuesday!  Kindle and Nook readers can download Beyond Ordinary: When a Good Marriage Just Isn’t Good Enough for free.  I don’t know how long this offer will last so go download yours today!

There was an error retrieving images from Instagram. An attempt will be remade in a few minutes.